Pro For a Day Workshop

One of the San Diego Association of Black Journalists favorite endeavors is a boot-camp for college students.  It is a full day of real world experience with some of the best journalists in town. Things kick off  with a panel discussion where student hear from professionals about every aspect of the media. Sales people, hiring managers, public relations experts, to name a few, give up precious sleep on a Saturday morning to field questions and give the students a glimpse into what working in the field is really like.

The day includes a mock press conference, usually based on a “ripped from the headlines” current event. The students produce their own story for a variety of platforms including social media. Our photography students document the Pro For a Day event as well as the mock news story. The social media cohort does everything from live tweeting to creating podcasts. It is fun, rewarding day for everyone involved. 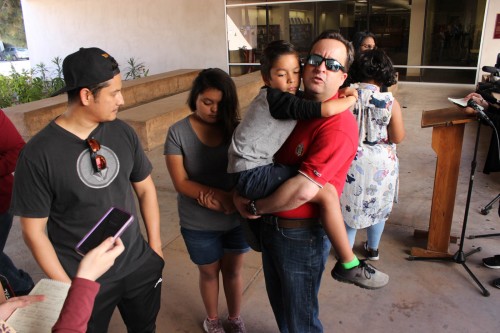 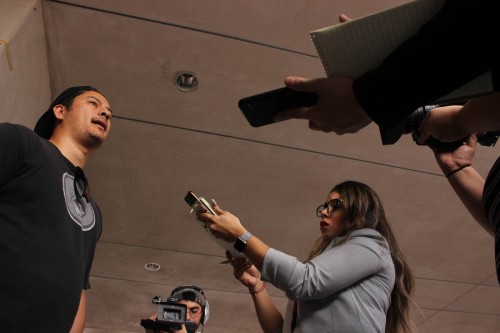 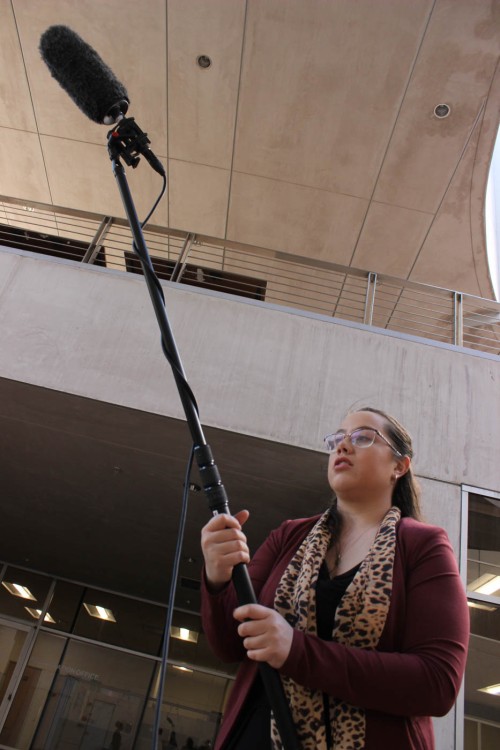 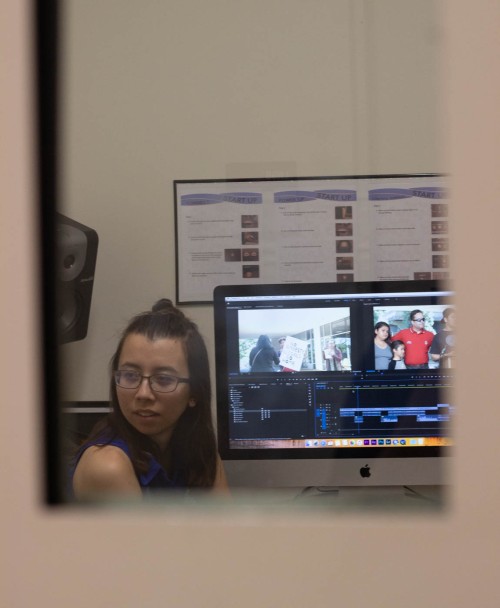 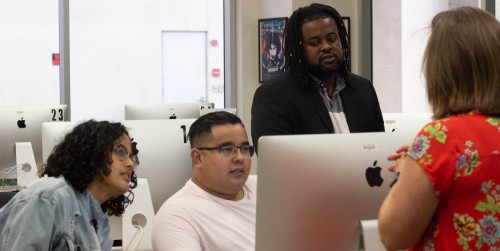 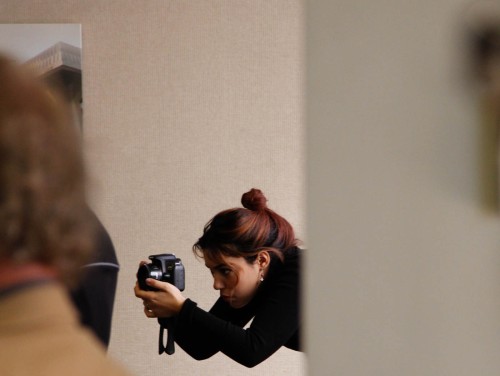 Nov. 09 , 2019 – Chula Vista, CA – Students and Professionals came together for the San Diego Association of Black Journalist Pro For A Day event at Southwestern Community College. Zemn Al Jaber checks to make sure that all the microphones are fully functional during before the press conference. Photo by Nicholas James

Nov. 09 , 2019 – Chula Vista, CA – Students and Professionals came together for the San Diego Association of Black Journalist Pro For A Day event at Southwestern Community College. Josh Smith (left) and other broadcasting students film an interview after the press conference. Photo by Nicholas James

Nov. 09 , 2019 – Chula Vista, CA – Students and Professionals came together for the San Diego Association of Black Journalist Pro For A Day event at Southwestern Community College. Various students from SDSU and Southwestern College film and take notes of the press conference. Photo by Nicholas James 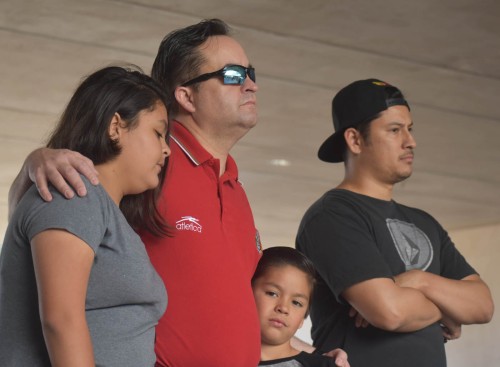 Nov. 09 , 2019 – Chula Vista, CA – Students and Professionals came together for the San Diego Association of Black Journalist Pro For A Day event at Southwestern Community College. A student from the broadcasting team films the discussion panel. Photo by Nicholas James 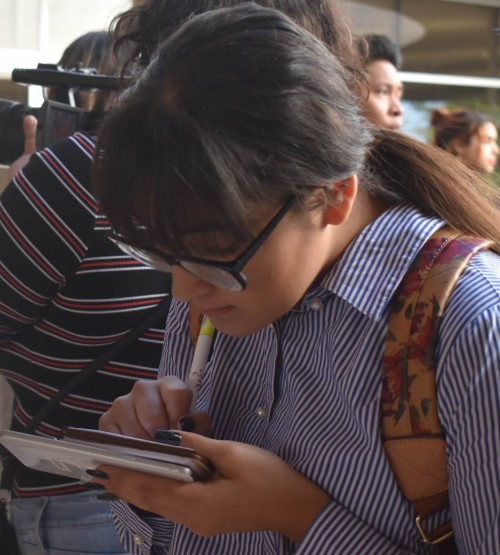 Nov. 09 , 2019 – Chula Vista, CA – Students and Professionals came together for the San Diego Association of Black Journalist Pro For A Day event at Southwestern Community College. Kiara Miranda from Southwestern College goes over her notes from the press conference. Photo by Nicholas James 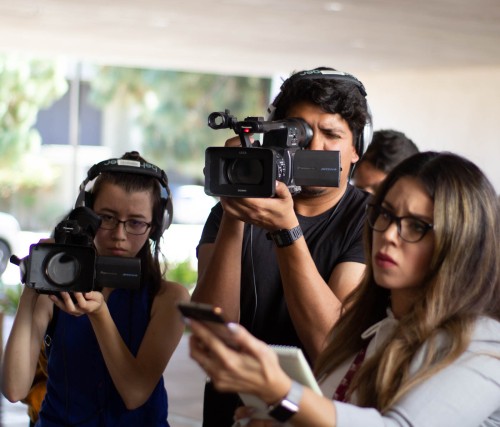 NOV.92019-CHULA VISTA-CA
STUDENTS AND PROFESSIONALS GOT TOGETHER FOR PRO FOR A DAY AT SOUTHWESTERN COLLEGE. VALDEZ AND STUDENT JOURNALIST. PHOTO BY CHRISTOPHER LEFALL

NOV.92019-CHULA VISTA-CA STUDENTS AND PROFESSIONALS GOT TOGETHER FOR PRO FOR A DAY AT SOUTHWESTERN COLLEGE. JANICE JOHNSON. PHOTO BY CHRISTOPHER LEFALL 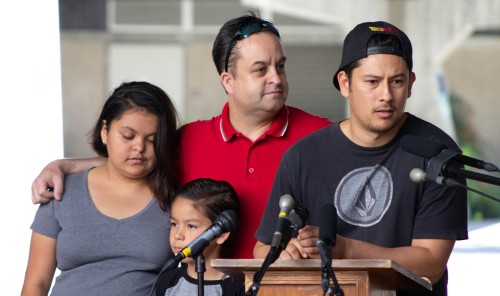 NOV.92019-CHULA VISTA-CA STUDENTS AND PROFESSIONALS GOT TOGETHER FOR PRO FOR A DAY AT SOUTHWESTERN COLLEGE. MISAEL VIRGEN AT MOCK CONFRENCE. PHOTO BY CHRISTOPHER LEFALL

NOV.92019-CHULA VISTA-CA STUDENTS AND PROFESSIONALS GOT TOGETHER FOR PRO FOR A DAY AT SOUTHWESTERN COLLEGE. STUDENT JOURNALIST. PHOTO BY CHRISTOPHER LEFALL

NOV.92019-CHULA VISTA-CA STUDENTS AND PROFESSIONALS GOT TOGETHER FOR PRO FOR A DAY AT SOUTHWESTERN COLLEGE. STUDENT JOURNALIST AND MOCK PROTESTERS AT PFAD EVENT.. PHOTO BY CHRISTOPHER LEFALL

NOV.92019-CHULA VISTA-CA STUDENTS AND PROFESSIONALS GOT TOGETHER FOR PRO FOR A DAY AT SOUTHWESTERN COLLEGE. STUDENT JOURNALIST AT PFAD EVENT. PHOTO BY CHRISTOPHER LEFALL

CHULA VISTA-Two Stephens University students were detained on campus by the U.S. Immigration and Customs Enforcement on Oct. 31.

Chancellor Janice Johnson announced at the press conference on Nov. 9 that ICE would no longer be allowed at Stephens University following the arrests.

She said the school cares for each of its students and reassured that what happened is not the norm. She said that no other student would be taken on campus again.

Juan Sanchez, a 20 year old student, said he was at the university’s parking lot when an ICE agent came up to him and put him in a jail cell for six hours. Nobody told him why it happened.

Sanchez said he was appalled by the whole situation. He said he came to the United States to get away from the danger his family faced in Sinaloa, but now he’s faced by a society that threatens him and judges him because of the way that he looks.

“It feels like the moment I stepped into this country, instead of being welcoming to us, there has been a lot of hostility,” he said.

“We don’t want you here. Go home!” a protestor yelled.

Sanchez’s family also attended the press conference and his father became visibly irritated by the crass remarks. He said that his family was constantly harassed by other residents and that there is a lot of hatred and racism.

Sanchez said that his family came to the United States three years ago to seek asylum and that they are legal residents. He said he will eventually go back to Mexico to start a life with his girlfriend.

The second student who was arrested was detained in one of his classes. The professor asked for the ICE agent’s badge, but the agent refused. He was arrested for becoming physical with the agent and he spent a night in jail.

Johnson said that the American Civil Liberties Union intervened and negotiated to get the students free.

Chula Vista- Juan Sanchez, a 20-year-old student at Stevens University, stood in front of a podium with his family speaking about his recent arrest by Immigration and Customs Enforcement.

On Oct. 31, Sanchez was one of two students arrested on campus without clarification as to why.

Janice Johnson, chancellor at Steven’s University, announced that the university will stop cooperating with ICE and federal agents will not be allowed on campus.

A press conference was held on Saturday, Nov. 9, to discuss the incident that took place on campus. The chancellor claimed that what happened was not the norm.

“Don’t judge the university by one incident.” she said.

When Johnson introduced Sanchez, a second-year economics major, he was greeted by discriminatory remarks from an anti-immigrant protestor.

“Go back to Mexico… Live the Mexican dream!” the protestor hollered.

Sanchez’s father was with him at the podium and retorted to the protestor.

“We are home!” he exclaimed.

Johnson intervened and asked the protestor if he needed to be called out by security. Despite the remarks, Sanchez continued through the conference without yelling back at the protestor. Some of his concerns were his safety on campus and why he wasn’t offered legal counseling while being in custody.

When asked about his arrest, he was unsure of why he was taken.

Other protestors butted in when the rude protestor spoke. They were exclaiming about their abolishment of ICE on campus and how they supported Sanchez and his family.

Once he left the podium, Steven Washington, a professor on campus, spoke about how him and his student was arrested. He described in detail about how the situation took place.

“I attempted to intervene to say ‘I want to call campus police, show my identification’ and at that point, I was arrested too.” he said.

After he finished speaking, Sanchez’s father came back up to continue fighting back against the rude protestor and how he didn’t understand what it’s like to live in Mexico.

Once the chancellor had enough of the protestor, she came to tell him to get out. He wouldn’t budge and the ICE protestors came to him to chant about no racism. The father continued to speak about unfair treatment towards immigrants despite the loud protests.

Photographers and reporters suddenly swarmed towards the protests and there were two conversations going on at once. It was becoming a mad house of words.

The university official called the meeting off before it would become uncontrollable. Those who spoke at the podium stuck around to answer questions from reporters.

Pro For A Day
Create a free website or blog at WordPress.com.